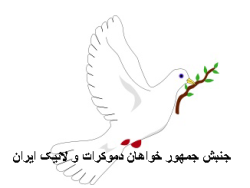 جنبش جمهوری خواهان دموکرات و لائیک ایران بر اساس روند دادگاه حمید عباسی "نوری" که در کشور سوئد برگزار و به محکومیت نامبرده منجر گردید، و همچنین محرز شدن نقش رئیسی، رئیس جمهور حاضر جمهوری اسلامی ایران، که در دوران قتل عام زندانیان سیاسی سال ۶۷ یکی از عامران و عضو هیئت مرگ بود،
از اقدام “کمیته حمایت از جنبش های نافرمانی مدنی ...." در اعتراض به سفر رئیسی به نیویورک به مناسبت اجلاس سالانه سازمان ملل متحد و از آکسیون مربوطه (نامه اعتراضی به سفر رئیسی و خطاب به دبیر کل سازمان ملل) حمایت می کند .
جنبش جمهوری خواهان دموکرات و لائیک ایران،
۲۰۲۲.۰۹.۱۸
Declaration of the Movement of democratic and laic Republicans of Iran in opposing Mr. Ibrahim Reissi`s, the president of the Islamic Republic of Iran , attendance at the United Nations` 77th General Assembly
Movement of democratic and laic Republicans of Iran, hereby, in accordance with the trial of Mr. Hamid Noori ( Abbasi )in Sweden ending in his cosequent conviction , and observance of proofs of active role of Mr. Ibrahim Reissi as a member in the infamous” Death Committee ” , responsible for the execution of number of iranian people in the year 1988, supports the claims made by ” Committee in defence of the civil disobedience of the Iranian people against the Islamic Republic of Iran ” addressed to the 77th General Assembly of the United Nations in the event of the Mr, Raissi attendance of the  21st of September ,  2022.
Movement of democratic and laic Republicans of Iran
18,09 2022
13 th of September 2022 To: His Excellency Antonio Guterres, General Secretary of the United Nations, and The Dignitaries of the General Assembly of the United Nations 0n this day of 21st of September 2022,e
some 77 years after it first adopted its charter, the United Nations once again assembles to assure the nations of the world that there exists a body to represent and safeguard the observance of world peace and the rights of human beings everywhere. This charter clearly states that the body assembled here is designed, among other objectives, to prevent the disasters and negative consequences of such things as war and disregard for human rights, wherever they occur. Seated in the assembly this year, however, is the president of the totalitarian regime in Iran, namely Mr. Ebrahim Raisi whose track record demonstrates anything but regard for human rights. At an early age and with scarcely any formal qualifications, Mr. Ebrahim Raisi became a member of the judiciary system in Iran's chaotic post-revolutionary times. From the very beginning, as he himself has admitted, he was a proud and active member of the infamous "Death Committee". This committee was created by Ayatollah Khomeini, the then leader of the country, to suppress any and all opposition in Iran at any cost. Mr. Ebrahim Raisi unashamedly claims to be honored to have signed the death warrants of hundreds of Iranians of all ages whose only objectives were to ensure the implementation of human rights and freedom in Iran. Between 1981 and the end of 1988 alone, some 5 000 Iranian men and women, young and old, were executed through the offices of the "Death Committee" of which Mr. Ebrahim Raisi is so proud to have been a member. With this appalling track record, Mr. Ebrahim Raisi has no place in an assembly whose charter sets out to defend human rights. In fact his presence among you is nothing less than a slap in the face of freedom fighters and defenders of human rights everywhere. His own words and actions clearly demonstrate that he lacks all respect for the values that the UN charter was adopted to protect. We therefore ask all members of the 77th General Assembly of the United Nations to show solidarity with freedom-loving people everywhere against the tyranny of the likes of Mr. Ebrahim Raisi by recognizing neither his presence among you nor his speech.
Respectfully, Committee in support of the Iranian civil  movements against the Islamic Republic of Iran CC/ Volker Türk High Commissioner for Human Rights of the United Nations
fShare
Tweet